Since the entire resource distribution system is realised via cart-pusher NPCs (e.g. there is no “beaming” of resources or products) and furthermore NPCs also distribute the final products to residential buildings, a lot of pathfinding has to happen.

The worst case, performance-wise, for any pathfinding algorithm is when a path is requested from point A to point B, but there is no connection between these two points. Every pathfinding algorithm can only find that by exhausting the complete search space. Since we have relatively many NPCs active at the same time, a repeated occurrence of this case would lead to catastrophic performance. Therefore, we have to avoid this case at all cost.

First type: NPCs who only walk on streets:

The streets in a city form a graph structure. Every crossing and curve forms a node in this graph. As the player builds his city this graph has to be updated incrementally. Depending on the action of the player, a new node may need to be added or removed. If the player places a street so that different street-networks gets a new connection between them at least two graphs have to be merged, or if the player deletes the last connecting street tile, a graph has to be broken up into two to four subgraphs. There are quite some corner cases to handle.

Every building in the game has, at least one, so called “access point”. These access points can be added as nodes into the existing graph (or form a new graph if they are alone). 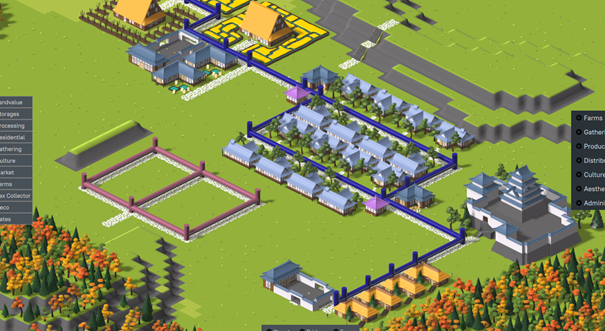 For example, if a production building is done with its work it wants to send a cart pusher to the next storage. Therefore, it has to determine where to spawn the NPC and to which storage it should send it. To achieve that it first finds the nearest storage and determines if the storage has space for the specific resource. Then it tries to find a combination of access-points (one from itself and one from the storage) so that this pair of access-point belong to the same graph. If that is possible there has to be a path between these two buildings, and therefore it can spawn the cart pusher NPC and do a pathfinding request.

These are typically resource gathering NPCs, for example a lumberjack. They spawn at their building and want to go to the next tree in the forest to harvest some wood. They need to evaluate if it is possible to reach their desired tree without doing pathfinding. To be able to do this, we have a so called “Segmentation Layer” and a segmentation graph.

The segmentation layer is generating directly after the world generation. Each tile gets assigned an id which identify its segment. All tiles in the same segment are trivially connected. Every tile which is reachable without going over cliffs or over water gets assigned the same id. To be able to generate this in a reasonable time frame a scanline fill algorithm is used, as simple flood fill was quite a bit slow. 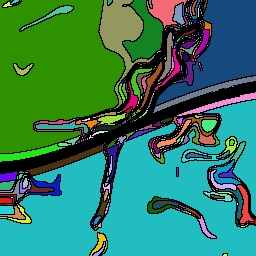